The City of Dresden serves as the county seat and currently has a population of 2,864 (2016). It was named by Mears Warner (1799-1863), who initially came to Weakley County as a commissioner to survey and lay out the future township. He requested the name in honor of the birthplace of his father which was Dresden, Germany.

The property where Dresden is presently situated was originally a 39 acre gift from John Terrell and a 17.5 acre purchase from Simpson Orgon and Ewing Wilson. The property was divided into 90 lots with a central block of land to be used for the construction of a county courthouse. In April of 1825 the first public auction for the sale of town lots was conducted.

Dresden was incorporated in 1827 and later expanded in 1843. The town was reincorporated in 1845 and later again in 1869. The corporate charter was repealed in 1885 in a shallow effort to drive saloons from the town. It would be eleven years after that repeal before another city government was formed. The most recent charter has since been amended several times, the last two changes were in 1968 and 1980.

The Nashville and Northwestern Railroad completed a rail line through Dresden in 1861.

Unfortunately, there were already railroad stations at Gleason, Ralston, Martin and Gardner which drastically effected trade in the community and drew business away from Dresden.

Before the railroads were built, Dresden was the center of commerce for the entire county and prior to the Civil War it enjoyed a prosperous business environment.

Dresden, TN (Oct 10th, 2010) Shown is the demolition of the railroad overpass located on Pikeview street. The removal of the overpass marked a symbolic end to the once thriving railroad that connected Dresden to Martin and Gleason and the entire country.

The rail system was constructed in 1860, partially destroyed in Dec. of 1862 by Gen. Nathan Bedford Forrest during the American Civil War. In 1907 the old line (roadbed) was replaced with new earthen trestles and modern bridges.

The railroad served Dresden with passenger service until the late 1950s and freight service slowly came to an end during the late 1980s. The overpass removal in 2010 made way for better traffic flow and truck service that was once limited by it’s low clearance.

Today Dresdens newly constructed walking trail, first named “Dresdens Rails to Trails” ends its westward leg, (to right in photo) with a scenic overlook of Pikeview Street with beautiful sunsets. The trail follows the old railroad bed for approx one mile east to west through the City of Dresden, mid point being Dresden’s Farmers Market.

Dresden, TN – Oakland Estate was located in Weakley County, Dresden – Oakland was constructed (antebellum) before the Civil War by Major Alfred Gardner and his wife Mary Ann, consisting of an estate of 1000 acres – Believed by some historians that Nathan Bedford Forrest stayed in the home during the Civil War (1862) as a guest and that his brother, Aaron Forrest had died in 1864, while being cared for in the home after falling ill while traveling through Dresden, immediately after having fought in the Paducah, KY raids. His body was later transported to Jackson, TN where it was determined he had died of pneumonia.

Oakland was purchased by Alfred and Bonnie Thompson in 1921. During the following years it was owned by the Taylors, Killebrews and Montgomerys – In 1964 the Montgomerys sold the home to Mr. & Mrs. Joe Anderson who converted the home into Anderson Funeral Home which was in operation for many years. The Andersons sold the home to Wendell Alexander of Dresden, who operated it for a few years as a funeral home as well. Later became the Landmark Restaurant until closing in the 1980s. After falling into disrepair it was torn down by the owner (unknown) in Nov of 2001.Oakland was located at the corner of state highway 22 and Sharon highway (state hwy 89) across from the present day Kountry Korner Restaurant – (photo 1960s)

Dresden, TN (Sept 3,1915)  Dresden’s first power plant. Dresden residents received water and power for the first time on Sept 3,1915. The power plant and water plant were both housed in a 60′ x 35′ building of brick and concrete floor construction. Forty four streets lights and 4 miles of electric line were hung on 200 poles. The power plant (seen) was a Harrisburg Engine (steam powered) turning a Westinghouse 2,200 volt AC generator at 300 RPM 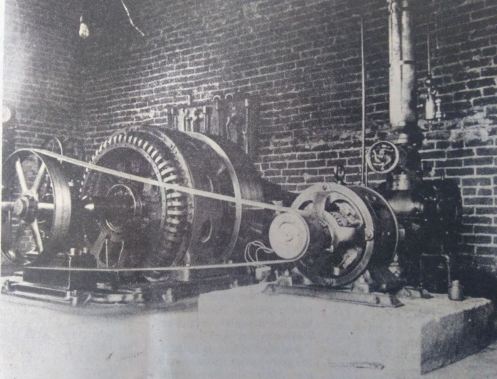 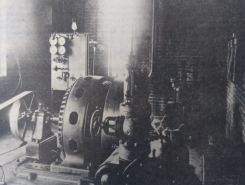 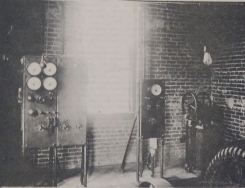 Superintendent appointed for the new city public works services was Mr. Harry Chandler, who had assisted in the installation of both water and power systems. Thought to have been located close to the Railroad depot (present day Farmers Market) The cost of both services to each home were offered to residents as follows : Min price per month for water to a home was set at 75 cents per month and $1.00 per month for (power) lights – Some info and photos courtesy of the Dresden Enterprise – By Robert Reynolds

The Weakley County Fair was held each year during late September, lasting three days. The fairs were themed Agriculture. Prizes were awarded to whomever entered the best crops and livestock; corn, tobacco, sweet potatoes or horses, cows and pigs. Ladies entered their best pies, cakes or quilts/crafts etc.. all hoping for the blue ribbon.

The fairgrounds were located just south of the railroad, behind todays West TN Veterinary Clinic on state hwy 22 west of downtown Dresden. The Dresden Enterprise advertised that patrons could attend the fair by rail, wagon, automobile or afoot. Parking was available for either auto or horse & buggy.

Each year the people of Weakley County gathered in Dresden to celebrate that years harvest. Women dressed in their finest apparel as men escorted their family to the fair.

The Weakley County Fair was held at this location from 1907 through the mid 1930s. The half mile horse racing track and later automobiles, is still visible today, remnants of the grandstand concrete foundation have been found as well. Some have told of a freshwater spring being located on the outskirts of the fairgrounds, where the years best illegal white liquor (moonshine) was secretly judged and sold.

Dresden’s Civilian Conservation Corps (Camp #1441) (1935-1942) Full story of the Dresden CCC Camp coming soon, visit the WHC website regularly for updates. The Camp was constructed Aug. 1935 and discontinued circa 1942. Approximately 200 troops were stationed at the camp during the mid 1930s through the early 1940s.

Below is a very rare photograph of the Weakley County courthouse after being destroyed (gutted) by fire on Feb 19th, 1948. Note damage to the upper section and windows.

According to the Dresden Enterprise, a fire was discovered around 6:30 am on the morning of the 19th (Thursday) coming from around the cupola. Fire departments from Dresden, Martin, Greenfield, and Gleason battled the blaze for several hours. Gleason fire department arrived just in time to save the Methodist Church which had been set ablaze by flying sparks.

The Enterprise reported the 90 year old, pre-Civil War courthouse was gutted by 9:00 am. Judge Pentecost stated that most of the county records had been saved by men who had formed lines and passed the records to nearby stores on the square.

The fire was believed to have been started by faulty wiring going to the fire siren atop the roof of the courthouse. Losses were estimated at $75,000 – This is the only know photograph showing the courthouse before it was torn down to make way for the existing courthouse, construction began soon after –  Photograph courtesy of Kim Washrurn of the Dresden Enterprise (photo subject to copyright ©)

Dresden, TN 1910 – Shown in photo above is the Weakley County American Civil War Confederate Veterans monument that once stood in the street on the northwest side of the court-square. Monuments honoring those who served during the Civil War face south, honoring those who died in battle face north. Throughout the early 1900s, in most Tennessee counties, the Daughters of the Confederacy provided funding for monuments honoring Civil War Veterans. Today the monument stands on the southwest corner of the courthouse lawn.