This article is a summation of the The West Tennessee Raid conducted by Gen Nathan Bedford Forrest from December 11, 1862 to January 1, 1863. Leading up to the raid on Dresden, Tennessee.  Some information is extracted from Chapter Seven from an 1868 published book written by General Thomas Jordan and JP Pryor titled Campaigns of General Nathan Bedford Forrest and of Forrest’s Cavalry.

In December of 1862, Confederate General Nathan Bedford Forrest crossed the Tennessee River in Clifton, TN and led his first raid into West Tennessee. His forces fought engagements in Lexington, Jackson, Humboldt, Trenton; raided Union stores in Union City, Dresden and McKenzie and fought a battle at Parker’s Crossroads. After having traveled from Clifton west to Jackson and then north to Humboldt, on Dec 20th Gen Forrest and 1800 men were traveling with urgency (fast) and approaching Trenton.

At 5 AM on December 20, Col. Dibrell’s regiment was sent to destroy a rail bridge at Spring Creek. Here he captured 100 more Yankees along with their arms and supplies. At the same time, Col. Starnes’ regiment and a squadron from Biffle’s regiment as well as Capt. William H. Forrest’s independent company, approximately 750 men in total, were dispatched to capture the town of Humboldt, which was completed by 10 PM. The Confederates captured four caissons with their horses, about 500 stands of arms, 300,000 rounds of small-arms ammunition and a multitude of other supplies.

Forrest reached Trenton at 10 PM on December 20, and began the attack forthwith with Maj. Nicholas N. Cox on his right. Forrest charged through town with his escort, during which two of his men were killed and three wounded, and then withdrew approximately 200 yards to what is now the Trenton Cemetery. Forrest fired his big guns toward the depot; after a brief skirmish, Capt. J.P. Strange, the Confederate Adjutant, posted the artillery and began firing again. When white flags were shown, Strange was directed to receive the surrender. Meeting with Union Col. Jacob Fry, an elderly officer asking the terms of surrender, Forrest replied, “unconditional”. Realizing he had no other alternative, Col. Fry un-swung his sword and handed it to Forrest, remarking sadly that it had been in his family for 40 years. General Forrest received the sword and handled it for an instant, then turned back to the colonel and said, “Take back your sword Colonel as it is a family relic; but I hope sir when next worn it will be in a better cause than that of attempting the subjugation of your countrymen.” This type of charity by Forrest to his enemies was documented many times.

Forrest with his escort and the new green volunteers managed to captured Trenton as the rest of his unit was scattered out in the region on other missions. Forrest had no more than 275 men but captured 400 federal soldiers, including Colonels Fry and Hawkins, several field officers, 300 negroes, 1000 horses and mules, 13 wagons and ambulances, 7 caissons, 20,000 artillery rounds, 400,000 small-arms rounds, 100,000 rations of subsistence, large amounts of cavalry equipment, quartermaster stores, and soldier baggage, collectively valued at more than $500,000 (equivalent to $12,000,000 in 2016). Forrest paroled some 1,300 Union officers and enlisted men to return home, as the captured POWs were growing too numerous to manage. Some 800–900 remained prisoners and were marched under the command of Lt. Col. Nathan D. Collins to be turned over to the federals in Columbus Kentucky. 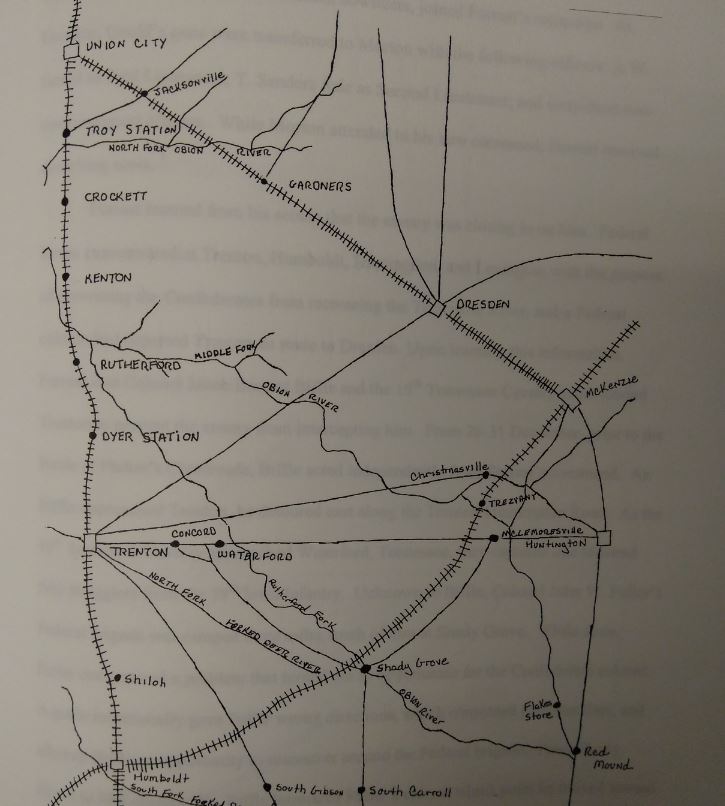 On the morning of December 21, Forrest resumed his advance toward Union City while Dibrell stayed as rear guard. Seven miles north, near Dyer, Tennessee Forrest captured a garrison of 30 men and its supplies. He burned more bridges and rails and traveled another seven miles, where he overtook his Commissary Maj. G.V. Rambaut. There was considerable federal resistance, and a firefight broke out against 250 federals who retreated to their fortification at Kenton Station (present-day Kenton). Forrest surrounded the stockade to prevent escape into the Obion Bottoms; after a few cannon shots the stockade surrendered with white flags fluttering from all directions. His men began to tear up all of the rails and burn all trestles in the vicinity. That night, Col. Starnes was ordered to destroy all rails along the 15-mile stretch of the Obion Bottoms.

The next morning, scouts reported that a federal force of some 10,000 men was moving from Jackson at a rapid pace. Despite this, Forrest continued his mission to Union City, still some 20 miles further up the road. In the meantime, Lt. Col. Collins was en route to Columbus and happened upon a beleaguered federal force who surrendered by his demand. Collins captured 250 men and supplies. On December 22, Forrest encamped and made haste to parole his new prisoners acquired since leaving Trenton. On December 23, some 300 men who were turned over to Col. Collins (approximately 1,400 men now) were sent to Columbus. Also on the 23rd, federal soldiers at an outpost near Moscow, Kentucky, some 12 miles distant, fled toward Columbus upon seeing the Confederates.

Forrest turned south to return some 12 miles south of Union City. A courier from Col. Starnes informed him they had destroyed the trestle works to the south of the Obion River. The entire command spent December 24 and 25 demolishing the solid heavy trestles on the North and South Forks of the Obion River, then rested for a few hours. Reports stated that Trenton was now occupied with 12,000 Union troops with the mission to destroy General Forrest’s unit.

On December 26, Forrest’s men destroyed the railroad bridge over the North Fork of the Obion, the Paducah Branch. 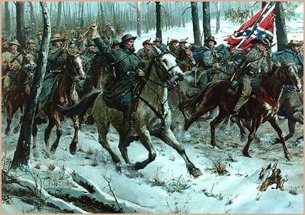 Forrest then put his whole force in motion toward Dresden, Tennessee 26 miles away, and camped near there for the night while waiting for scouting reports. Federals were rapidly advancing toward Union City from Trenton by road and a movement was made in force up the Obion in the direction of McLemoresville and Huntington to cut off the Confederates.

According to Dr. Lonnie Maness’ book “The Untutored Genius”, Forrest’s cavalry destroyed Union stores in Dresden, looked for Sen. Etheridge (a state politician who remained loyal to the Union) and destroyed the railroad bridge in Dresden.

Forrest and his 200 plus troops rode hastily up what is presently Etheridge Street with the intention of capturing Sen. Emerson Etherdige. The street had been the driveway of the home in 1862 and after surrounding and capturing the home found that Etherdige and his family were not home but were in Nashville, TN on business.

Upon finding Etheridge had eluded capture Forrest became enraged. ( according to stories past down by local families)  Forrest laid down in Emerson’s bed and conveyed to bystanders ” Tell Etheridge, I have slept in his bed with my boots on”  Forrest and his troops left the home disappointed and rode to the Railroad bridge just south of town and cut it down with axes, burning the remains of the wooden structure and using it during  the night to keep the troops and horses warm during the cold of the long night, they encamped in the field south (next to) the now destroyed railroad bridge.

It is believed that Forrest himself stayed the night of the 26th as a guest in the home of Major Alford and Mary Gardner, who owned Oakland Estates in Dresden. The same home his brother Arron would later die in after falling ill while travailing through Dresden in 1864 after having fought in the Paducah, KY raids. It was later determined by a doctor during his autopsy in Jackson TN , Capt Arron Forrest had succumbed to the illness of pneumonia.

What remains today of the Dresden, Tennessee Raid are stumps of the railroad bridge supports, showing ax marks from the Confederate cavalrymen. The soldiers had obtained axes from the community of Dresden.

According to Teresa Rachels of Dresden, TN her great uncle Richard L. Jackson on Dec. 26, 1862, who at the time was 15 years of age, was instructed by his Mother, Mary Margaret Winston Kimbrough Jackson to carry water from a near by spring to the troops at the encampment. Jackson was fitted with a wooden pole rigged over his shoulders with buckets on each end, then carried fresh water to the troops and their horses for the entire day of the 26th. Richard L. Jackson was the son of Hosea Jackson, a cabinet maker of Dresden and the grandson of Judge John Jackson of North Carolina. Judge Jackson had fought with Andrew Jackson in the battle of New Orleans. While traveling to New Orleans both Jacksons, while in conversation, came to the same conclusion that both had descended from the same great grandparents in Londendreey, Ireland. Judge Jackson was also the first cousin of Gen Stonewall Jackson and a brother-in law of President James Madison.

In 1862 Richard L . Jackson and his family lived on their family farm located on present day Shobe Road that ran at the time from the Paris highway (West Union Church) to the old Dresden Gleason road near the former Hall Printing Company – The above Jackson Family information verified by Virginia Vaughn of Weakley County History and Families and Robert Reynolds of Dresden, TN.